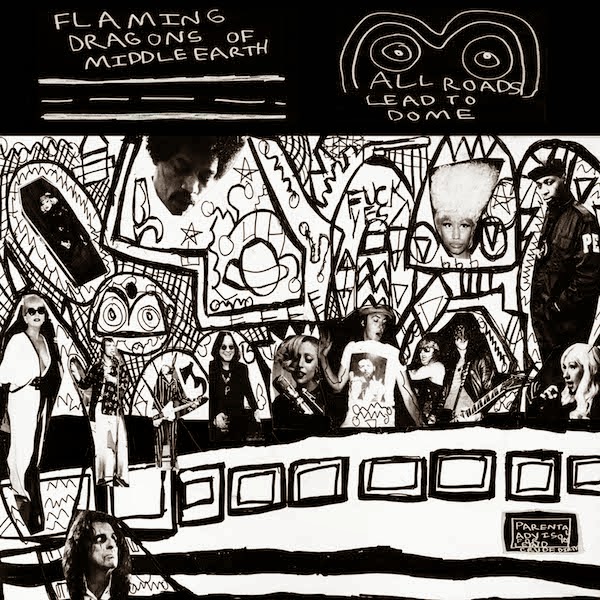 Flaming Dragons of Middle Earth (FDOME) is a band of misfit children and adults who have been holding weekly “practices” for the last eight years at a teen center in the mildly dilapidated town of Turners Falls, Massachusetts.  One Kind Favor has the distinguished honor of distributing the group's self-released LP, All Roads Lead to DOME, the most accomplished album from the group yet.  I feel like Volcanic Tongue’s David Keenan has described the band better than I could so I’m going to let him talk for a minute:

Led by wheelchair-bound ‘band shaman’ Danny Cruz and consisting of a rotating group of non-musicians, psychedelic drop-outs, teenage metalheads, kids with Down Syndrome etc, Flaming Dragons play a form of super crude/sophisticated free rock ala The Godz or even a punk-primitive Arkestra but with Cruz’s stunning, oracular vocals giving them a mainline to the freak flag style of prime Captain Beefheart, Roky Erickson and Wasa Wasa-era Broughton. Cruz’s instant lyric inventions are as mind-boggling as your favourite medium while the group lurch around on staggering brokedown rhythms somewhere between early-Sabbath, Robbie Yeats of The Dead C and The Shaggs. Their material ranges from stripped-down raps to lumbering psychedelic rock, as well as free-form freakouts w/lyrics that obsess over murder, bloodshed, astral creeps and, uh, Joni Mitchell... indeed Cruz makes most ‘sound poets’ sound like children’s entertainers.


I’ve worked closely with Danny and his crew for the last six years, so you can trust me when I say that this new FDOME disc is hands down the best thing the group has recorded and one of the most unusual, yet enjoyable, records I’ve had the pleasure of holding in my hands.  You can listen to a few songs from the album above.  Some of the band’s previous releases have been on Feeding Tube Records, but now Danny is in complete control of his music with the aide of his personal care assistants/bandmates.  Take a walk on the wild side, you’ll be glad you did.

more audio, video and text from FDOME on their webpage.