Sound Ceremony Precious As England
The group's third and final album (originally released in 1981) is now available for download from bandcamp. Stream or download the complete album here: 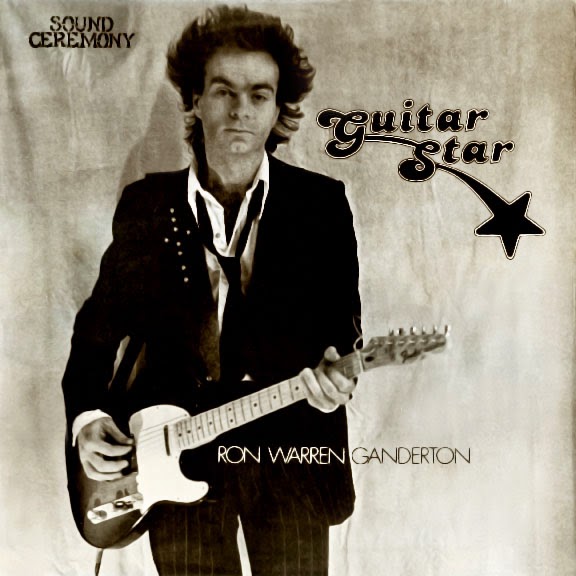 First time vinyl reissue of the Outsider, Real People, proto-punk fuzz of Sound Ceremony's first record, Guitar Star. From the mid 1970s to the early 1980s multi-instrumentalist Ron Warren Ganderton (electric and acoustic guitar, harmonica, keyboards and piano) - under the name Sound Ceremony - along with a rotating cast of accompanists (including future members of the Pretenders, late period progressive rockers Quasar, and Subway Sect) created a hard to narrowly define, small catalog of sounds praised by private-press hunters, esoteric appreciators and “out of time” searchers. Ganderton’s output holds echoes of monotone mavens like proto-punks Jonathan Richman and Lou Reed, similarities to cult-raved acts such as Armand Schaubroeck and Kenneth Higney, and carries a loose influence of the ‘talking blues’ tradition while maintaining a uniqueness and singularity laced with ‘60s fuzz, primitive and skittering rhythms, and alternately confrontational and heart-on-sleeve topicality—thusly eking out its own sonic territory with a population of one. To put it down succinctly, just like a period advertisement did, Ron Warren Ganderton is, “One of rock’s individuals.” Originally released circa 1978. Insert with detailed liner notes from Jeremy Cargill (Ugly Things/Got Kinda Lost), plus rare photos. One time pressing of 500 black vinyl.

The second, self titled, Sound Ceremony album was reissued by OKF in January 2012.

"We bring to your attention, an invitation to the bizarre." So goes the final song on Canadian born guitarist and songwriter Ron Warren Ganderton 1979 LP with his group Sound Ceremony. Ganderton self-released three LPs with the band while living in the United Kingdom during the 1970s and 80s. First came Guitar Star (1978), then Sound Ceremony (1979) and finally Precious As England (1981). Despite some modest distribution and frequent gigs, the band never seemed to really take off and Ganderton eventually returned to his native Vancouver (where he still resides), leaving hundreds of unsold records in the attic of his house. While these copies seem to have been lost to the ravages of time, One Kind Favor will now reissue the second Sound Ceremony LP. All of the group's efforts are undeniably unique, but their middle record is the true brain-damaged winner of the bunch. The record surely fits somewhere into the UK punk explosion of the day, but it's also looks back to the mid-sixties rock that Ron cut his teeth on and ahead to some sort of maniac future form of entertainment that perhaps has not been invented yet. Ganderton's mildly "out of it" stream of consciousness lyrics show a clear lack of self-censorship and that's really one of the albums strongest assets. He has created this character of himself as a huge rock star and a sex symbol, and who are we to deny his claims? The band chugs along amiably as Ganderton covers such terrain as his beating heart (it's made of rock), his distaste for education (he'd prefer to teach a lesson in bed) and his electric brain (which happens to be insane). If you've never heard a singer do a count-off all the way up to seventeen, then now is your big chance! Features what is perhaps the greatest anti-cigarette song of all time.  One time pressing of 500 copies on black vinyl.

Ron Warren Ganderton of Sound Ceremony (OKF 002) sent me this amazing cache of photos and promotional material from the 70s and early 80s.  I'm really pleased to make these available for viewing for the first time in years!  View the gallery. (24 images)

Videos
80s Sound Ceremony!
"Dancing With My Shadow"
"Find A Way Out"