After creating a successfully funded Kickstarter campaign, One Kind Favor is proud to bring you the first official vinyl reissues of two rare 1970s self released LPs. Kenneth Higney's Attic Demonstration has long been prized for it's oh-so-confounding blend of desolate balladry and shattered trucker rock. Less known, but equally off-centered, is Ron Warren Ganderton's 1979 self titled long player with his group Sound Ceremony. 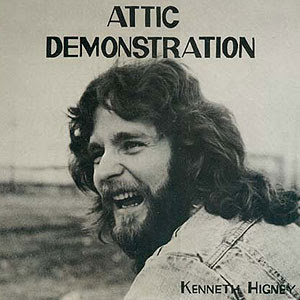 Often considered the Holy Grail of "real people" records, Kenneth Higney's Attic Demonstration was never actually intended to be an official release. It was recorded in New York City by Higney and his accompanist Gordon Gaines (R.I.P.) as a vehicle with which to sell Higney's songs to other artists and was only pressed to vinyl in 1976 when he grew tired of duplicating cassette tapes. Apparently the Jandekian dissonance of the A. Demo. sound was an unintended by-product of the one take demo sessions. Be that as it may, Attic Demonstration is a strange sonic world all of it's own. It is neither too weird to be unappealing to "regular" music listeners nor is it one of those "discoveries" that leaves you wondering what all the hype was about. Acoustic guitar ballads of nearly atonal desolation mix readily with rock 'n' roll numbers featuring hiccuping drums and alien sounding electric guitar. Higney's vocals are by turns sneering and mournful as he sings about lost love and the desire for fame all filtered through his uniquely bent worldview. Although a few ads were placed for the record in The Village Voice and The Aquarian, the fame that Higney sought eluded him (a semi-positive review in Trouser Press notwithstanding). That is, until the album was discovered and distributed by record dealer Paul Major. Attic Demonstration has been featured in the books Acid Archives and Enjoy The Experience with copies of the original LP soaring in price over the years, but you no longer have to pay $100, $200 or even $300 to obtain a copy of this monumental album on vinyl. One Kind Favor and Kenneth Higney have teamed up to bring you an official reissue of Attic Demonstration remastered, with all the original artwork and with liner notes by the artist.  The reissue was Volcanic Tongue's January 2012 Tip of the Tongue.

Kenneth Higney's LP was a watershed moment for me... before that I was more focused on hard rock bands, psychedelic music, garage punk and the likes, whether major label or private press. The force of honest expression mixed with the sound of that LP blew my mind as well as made me keenly aware of the concept of someone putting their own record out. I felt like I was inside the artist's head when I played it.

Listen to "No Heavy Trucking" mp3 and "Children of Sound" mp3 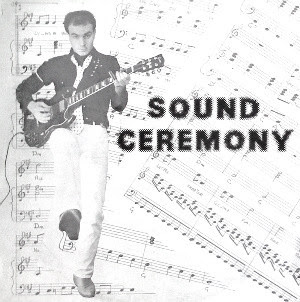 DIGITAL
find a copy on discogs

"We bring to your attention, an invitation to the bizarre." So goes the final song on Canadian born guitarist and songwriter Ron Warren Ganderton 1979 LP with his group Sound Ceremony. Ganderton self-released three LPs with the band while living in the United Kingdom during the 1970s and 80s. First came Guitar Star (1978), then Sound Ceremony (1979) and finally Precious As England (1981). Despite some modest distribution and frequent gigs, the band never seemed to really take off and Ganderton eventually returned to his native Vancouver (where he still resides), leaving hundreds of unsold records in the attic of his house. While these copies seem to have been lost to the ravages of time, One Kind Favor will now reissue the second Sound Ceremony LP. All of the group's efforts are undeniably unique, but their middle record is the true brain-damaged winner of the bunch. The record surely fits somewhere into the UK punk explosion of the day, but it's also looks back to the mid-sixties rock that Ron cut his teeth on and ahead to some sort of maniac future form of entertainment that perhaps has not been invented yet. Ganderton's mildly "out of it" stream of consciousness lyrics show a clear lack of self-censorship and that's really one of the albums strongest assets. He has created this character of himself as a huge rock star and a sex symbol, and who are we to deny his claims? The band chugs along amiably as Ganderton covers such terrain as his beating heart (it's made of rock), his distaste for education (he'd prefer to teach a lesson in bed) and his electric brain (which happens to be insane). If you've never heard a singer do a count-off all the way up to seventeen, then now is your big chance! Features what is perhaps the greatest anti-cigarette song of all time.

More info and an amazing photo gallery of Ron in the 70s here.