"We Are The Guinea Pigs" Lathe Cut 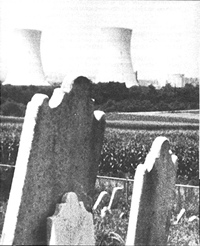 We Are The Guinea Pigs
Soundtrack by The Fourth Wall
Lathe cut vinyl 8". Limited to 27 copies with homemade covers.


A short soundtrack to the 1980 documentary film "We Are The Guinea Pigs" (dir. Joan Harvey) which deals with the aftermath of the Three Mile Island nuclear disaster.  The music is by an unnamed band of New Yorkers associated with the Fourth Wall theater group.  The raw music is reminiscent of the "Savage Sons of Ya Ho Wa" LP (1974), which in turn recalls Neil Young's "Ditch Trilogy," but the sole focus of the lyrics is the evils of nuclear energy.  The politics are definitely socialist and anarchist leaning, with lines like "even Charlie Manson had more respect for law."  At the time of the film's release some found the music in poor taste, or at the very least, highly unpolished, but looking back, there is much to be enjoyed about the sounds of this rag tag pick-up band singing about a cause they believe in.

''We Are the Guinea Pigs'' occasionally cuts to a rock band, which performs topical songs. ''Leukemia and cancer have already taken their toll/ Do you wanna die young, do you wanna grow old?'' one lyric goes. This band seems well intentioned, but its music can't help trivializing a gravely serious subject. -- from the New York Times review of the film

Whatever New York Times, listen for yourself: