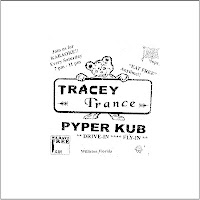 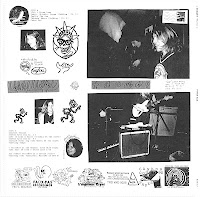 Tracey Trance Pyper Kub OKF 006 LP - SOLD OUT
In today's world of "internet presence," the music of Tracey Trance is as "real people" as it gets.  When Tracey (AKA Tyler, longtime resident of Hangtown, USA) does happen to get on a computer, it's only to spin rainbow colored poetry to a friend or figure out the next spot he's gonna park his truck.  Although he's been granted releases on such taste making labels as Not Not Fun and Night People, he's turned in lo-fi home recordings that are difficult to pin down in any one time, place or genre.  Pyper Kub is his debut long playing vinyl and it is a startling and heartfelt departure from the hypnagogic keyboard recordings that many have enjoyed over the last few years. This is a song based record, focusing mainly on guitar, bass and vocals.  There's a little Slang Tang, some serious wah-wah, a dollop of Joe Walsh circa But Seriously, Folks...  and there's a lot of Tyler's odd, elfish spirit.  A collection of road songs that plays out in some sort 70s mirror universe.  My favorite finds our hero contemplating the fine line between freedom and imprisonment while a K-9 unit searches his truck.  This record has a way of growing on you, and I've played my copy of the original ultra-limited cassette release countless times.  Nifty vinyl co-release with Trd W/d, Hot Releases, Feeding Tube Records, Faux Pas Recordings, L'animaux Tryst & Canada Goose Tapes. Edition of 700 cream colored vinyl. Each label will provide a different limited edition sticker to go on the front cover. Stream two songs or download the complete album on the One Kind Favor bandcamp.  Sold out from OKF, try one of the co-releasing labels linked above.