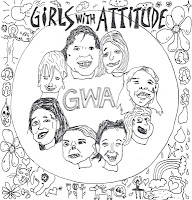 One Kind Favor proudly presents a limited edition lathe cut 7" reissue of the complete discography of  Girls With Attitude, a band from Montreal that got their fifteen minutes back in the year 2000 thanks to a handful of songs that spread like wildfire through the cruel spheres of internet "humor" sites.  The most succinct description of the GWA sound might read "The Shaggs of the Mp3 generation."  While their music hits on some of the same amateur vibes as those New Hampshire legends, it is also much more unintentionally psychedelic.  Imagine a gaggle of eight pre-teen girls huddled around a mysterious keyboard capable of imitating funky synthesizer lines and wah-wah guitar solos in the same breath, all singing in unison through a karaoke machine with the echo turned all the way up.  GWA attracted the attention of Time Magazine who said "The Internet has given an audience to thousands of talentless musicians who don't even deserve a garage to play in.  'There's Nothing in My Dreams,' the latest single by Girls With Attitude, consists entirely of a prepubescent girl moaning tunelessly about puppies over an all-Casio backing track".  No need for any more description, just listen to the complete EP on the youtube fan video and decide for yourself.  This release is limited to 27 copies on lathe cut vinyl with color labels.  The vinyl is housed in a xerox paper sleeves featuring a hand drawn interpretation of the orignal GWA logo.  SOLD OUT